As the debate around Brexit and the Border rages on; Tomás from End Deportations Belfast talks about the Border, Policing and the treatment of people trying to cross the border before brexit takes place.

End Deportations Belfast are hosting an Anti-racism for Grassroots Organisations training event on June 23rd – more details on how to attend here.

The media hype around Brexit has thrown the nature of Irish border back into the public spotlight. Yet in all the discussion of what may happen on the border – will it be hard or soft? – what has been missed is that for migrants, ethnic minorities, people defined by their lack of correct papers, or for people who do not look or sound ‘typically’ white Irish or British, the Border between the North and the South has never been the open border that it has been described as in Brexit opinion pieces and hot takes. 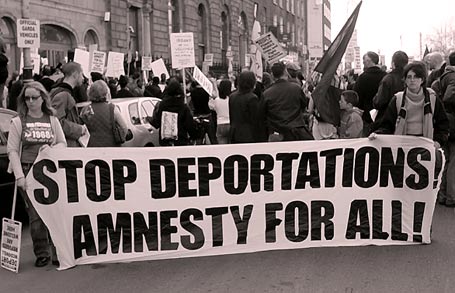 Under UK law, movement within the Common Travel Area, which includes all of the island of Ireland, as well as Great Britain and the Channel Islands, cannot be subject to passport control. Similarly the UK and Ireland have both committed to free travel across the Irish border as part of the Good Friday Agreement.

Recently, however, stories have begun to emerge of increasingly frequent passport checks, often carried out by the Garda Síochána in signal dead-zones just South of the border, that take place on buses travelling from North to South. In the words of a report by the Migrants Rights Centre Ireland, a Dublin-based NGO, border controls “are now gradually being re-introduced for the purposes of immigration control. Such measures undermine the spirit of the Good Friday Agreement and need to be stopped.”

These border controls form part of a secretive joint-policing operation that involves participation by both the PSNI and the Gardaí. This operation, known as Operation Gull in the UK, and Operation Sonnet in the South, involves immigration checks on public and private transport on people moving within the CTA, including across the Irish border. While the authorities continue to deny that these immigration checks are becoming routine, their increasing frequency is becoming noticeable to anyone who regularly commutes across the border.

What’s more, it’s becoming increasingly obvious that racial profiling and the targeting of those who don’t who look Irish or British is informing these checks. On May 9th the Belfast Telegraph published an interview with a Derry man who had been asked for his passport by the Gardaí after crossing the border on a Translink bus service. Though he had no ID with him, the Gardaí did not press him after hearing his accent – “When he heard my accent and realised I was from the North, he said it was okay, so I was left with the impression it may have been an immigration check but that certainly wasn’t mentioned and it wasn’t something I had ever come across before.”

Despite this authorities in the UK deny that racial profiling is happening – in the words of the Parliament Undersecretary for the UK and Scotland “there can be no racial profiling at a border, whether it be routine, quixotic or even accidental. That cannot be the policy or the direction; there cannot be even a hint of that going on at the border.”

Nonetheless other commuters who witnessed similar instances of racially-targeted immigration checks have reported even more blatant racial profiling. One commuter posted on Facebook on the 23rd of April that he was on the bus from Belfast to Dublin when his bus “was just stopped by the Gardai (unmarked car) at the border and everyone checked for ID.” He described how “We didn’t have any proper id (why would we) and were passed over but it looked like ppl [sic] with different skin colour or perceived different ethnicity seemed to be proper checked.”

A week beforehand, on April 14th, a different commuter wrote that he was on the bus to Dublin when the Gardaí boarded it for an immigration check. “Just shows that the border was never invisible for migrants,” he wrote, adding “another thing that’s not invisible is police men only checking BAME people’s id.”

On March 8th, a passenger on an Aircoach service from Belfast to Dublin posted on Twitter that “Gardai Immigration officers have stopped our coach in a layby and have asked everyone for Passports/ID.

The only black guy on the bus is being asked if he has an Irish ID or Visa.” He followed with a second post to say that the man in question was taken off the bus “to sort it out at the office”, although white, Irish passengers also didn’t provide ID, and nothing happened to them.

In none of the cases listed above, did the Gardai say which legislation they were acting under. In the context of widespread reports of this kind of racialized targeting and harassment, both in the Republic and the UK, a report by the Law Centre (NI) believes that “individuals are being targeted on grounds of ethnicity/nationality or other discriminatory grounds”, and has questioned the legality of Operation Gull as a result.

The Dublin office of ENAR (European Network Against Racism) considers racial profiling to be a form of racial and ethnic discrimination. In this context, they are encouraging witnesses of racial profiling by the Gardaí on public transport (or elsewhere) to log this on their online database at ireport.ie. Incidents witnessed North of the border can be recorded at https://edbracistreporting.typeform.com/to/kl6yCY.

Another concerning development is the growing suspicion that the policing authorities North and South are using the counter-terrorism powers available to them under Operation Bi-Vector, a cross-border counter-terrorism operation, to make immigration-related arrests that have nothing to do with terrorism. The police have used these powers 12,479 times in Northern Ireland between 2013 and 2016, a disproportionately high statistic in relation to the rest of the UK in terms of the population of Northern Ireland, yet not one single person was actually detained under counter-terrorism legislation. Instead, many people stopped under these powers were turned over to immigration authorities, a fact that makes it clear that counter-terrorism powers are being abused in order to make immigration-related arrests, and to further feed into the hostile environment created by the increasing evidence of racial profiling on public transport.

End Deportations Belfast is a group that formed out of witnesses and people affected by these policing measures to take a stand against racist policies including racial profiling, indefinite detention and deportations. As a group, we demand a open Border between the North and South that is free for anyone to cross, without harassment or discrimination from police services or other state forces, regardless of their skin colour, accent, citizenship status or visa. Over the next few months we will be taking action to draw attention to and fight back racial profiling on the Irish border, and to demand an Open Border for All.